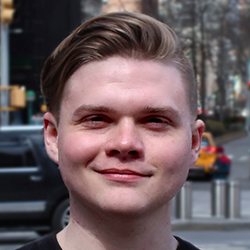 Dennis earned his Bachelor of Music in Vocal Performance from Southern Methodist University in Dallas, Texas. Dennis performed with various professional theater companies while in Texas, including playing Matt in The Fatasticks and Nanki-Poo in The Hot Mikado at Theatre Three, Fyedka in Fiddler on the Roof at both Casa Mañana and Lyric Stage and Doc in The Golden Apple at Lyric Stage. He also appears as Doc on the first full-length recording of The Golden Apple released by PS Classics. In 2016, Dennis won second prize in the international Lotte Lenya Competition held by The Kurt Weill Foundation, which was judged by opera legend Teresa Stratas, Broadway music director Andy Einhorn and head of the Rodgers & Hammerstein Organization Theodore S. Chapin. Before joining DCINY, Dennis worked in Operations at The Public Theater and is also currently a staff singer for First Universalist Unitarian Congregational Society of Brooklyn and a member of the Actor’s Equity Association.