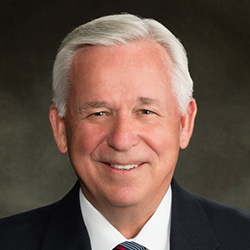 Dr. Craig Jessop is the Dean for the Caine College of the Arts and Professor of Music at Utah State University.

Dr. Jessop has a Bachelor of Science from Utah State University; Master of Arts from Brigham Young University; and a Doctor of Musical Arts in Conducting from Stanford University.

At the Opening Ceremony of the 2002 Winter Olympic Games in Salt Lake City, Dr. Jessop conducted the Mormon Tabernacle Choir and the Utah Symphony, working with world-renowned artists Sting and Yo-Yo Ma, and composers John Williams and Michael Kamen. Other artists with whom he has collaborated include Renée Fleming, Frederica von Stade, Bryn Terfel, Audra McDonald, The King’s Singers, Angela Lansbury, Claire Bloom, Walter Cronkite, and Charles Osgood. In 2003, Dr. Jessop conducted the choir and prepared the singers for a performance of A German Requiem at the prestigious Tanglewood Festival with the Boston Symphony Orchestra and Rafael Frübeck de Burgos. A much sought-after guest conductor, Dr. Jessop has conducted the Carnegie Hall National High School Choral Festival sponsored by the Weill Music Institute at Carnegie Hall and the Berkshire Choral Festival.

DCINY email servers were down from Friday morning (12/2) through Monday morning (12/5) due to a global outage with Rackspace. If you sent an email during this time please kindly resend. We remain available as always by phone and email.