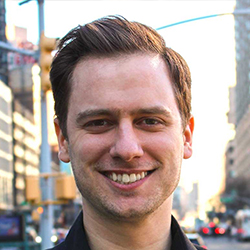 Jeffrey Binner received his bachelor’s degree at the Sunderman Conservatory of Music at Gettysburg College where he studied composition under the mentorship of renowned composer Avner Dorman. An avid saxophonist, pianist, singer, and actor, he enjoys any opportunity to create, collaborate, and entertain.

Jeffrey composes music for commercials, television, film, and both professional and school ensembles. Notable musicians that have performed his music include SHUFFLE Concert, the Amernet String Quartet, the Da Capo Chamber Players, and the Allegro Chamber Orchestra. He assisted during the scoring of the film “The Wonders,” produced and directed by award-winning Israeli director, Avi Nesher. Jeffrey was chosen as a winner for the 10th Annual Reading Session with the Pittsburgh Symphony Orchestra where his music was performed by the acclaimed ensemble under the baton of Leonard Slatkin.

DCINY email servers were down from Friday morning (12/2) through Monday morning (12/5) due to a global outage with Rackspace. If you sent an email during this time please kindly resend. We remain available as always by phone and email.