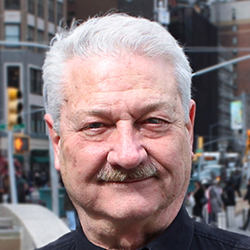 An acclaimed conductor, educator and lecturer, Jonathan Griffith has led performances across North America, Europe and Asia. Griffith is co-founder and Artistic Director of Distinguished Concerts International New York (DCINY), which has brought together, under Griffith’s artistic leadership, thousands of musicians and choral singers in concert at prestigious venues across the United States, including Carnegie Hall, Lincoln Center and Disney Hall. The founder and Music Director of the Distinguished Concerts Orchestra, Griffith also oversees DCINY”s mentoring program for conductors.

Maestro Griffith made his Carnegie Hall conducting debut in 1989 and has since conducted well over 65 performances at Carnegie Hall and Lincoln Center combined. In addition to the major works of the classical repertoire, conducting highlights include the U.S. premieres of Karl Jenkins’ Stabat Mater and Te Deum; Sergei Taneyev’s At the Reading of a Psalm; Miloš Bok’s Missa Solemnis; Luigi Boccherini’s Villancicos; and Eugène Goossens’ reorchestration of Handel’s Messiah, along with world premieres by Eric Funk, Seymour Bernstein, and Robert Convery.

The Jonathan Griffith Singers, an ensemble drawn from singers across North America and founded in 1987, has made its mark internationally. In recent years, Griffith has led the Singers on highly acclaimed tours to Uruguay and Argentina; to the People’s Republic of China, premiering Karl Jenkins’ The Armed Man: A Mass for Peace in Beijing and Shanghai; and to Pisa, Italy. Dr. Griffith and the Jonathan Griffith Singers toured Turkey in June of 2013 performing the acclaimed Turkish oratorio Yunus Emre by A. Adnan Saygun in Istanbul with the Cemal Reșit Rey Orchestra and in Ankara and Eskinșehir with the Presidential Orchestra at the invitation of the TURKSOY governmental agency. Maestro Griffith is the 2014 winner of The American Prize in Conducting, professional orchestra division.