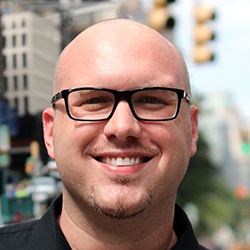 Justin Zang received his Bachelor’s Degree in Vocal Music Education and his Master’s Degree in Choral Conducting from the University of Maine. While attending UMaine, Justin performed with numerous choirs including the University of Maine Singers under the direction of Dr. Dennis Cox where he toured all of New England and Internationally. He was also a member of the Maine Steiners, UMaine’s premiere all-male a cappella group, with whom he is featured on three recorded albums and participated in over 100 performances annually. For the past seven years Justin has served as the Associate Director of the Black Bear Men’s Chorus, UMaine’s Oratorio Society and Euphony, an advanced chamber choir based in Orono, ME. Justin has also been a vocal adjudicator for Maine’s District III for five years and has directed numerous festivals including Maine’s District V & VI Honors Choirs.

From 2010-2018, Justin has worked professionally at the University of Maine with numerous departments including New Student Programs, Admissions and Marketing & Communications. In 2014, Justin became the Assistant Manager of Theater Operations at the Collins Center for the Arts, one of the largest performing arts facility in the state of Maine, where he organized and managed over 200 events and performances each year.