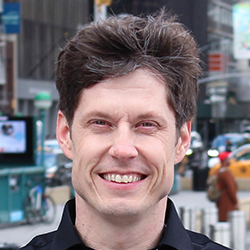 A graduate of Concordia College in Moorhead, MN, Kevin began his career in the entertainment industry as founder and original member of the male vocal ensemble Marcoux Corner. For 10 years, this high-energy a cappella group became one of the genre’s most sought-after stage acts, touring internationally performing for audiences from North Dakota to Shanghai.

Following his performance career Kevin became involved with booking and producing a broad range of performances, first as an associate at G.L. Berg Entertainment in Minnesota and then as a team member at Opus3 Artists in New York City coordinating tour details across the globe for the world’s most celebrated classical music performers.

Armed with a broad range of experience, he has a unique understanding of what makes events successful and the life changing impact of live performance. With a sincere belief in the power of music to enrich people’s lives he’s proud to be part of the dedicated team at Distinguished Concerts International New York (DCINY).