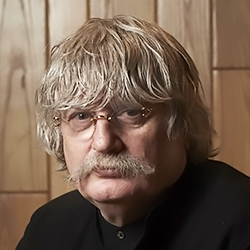 Sir Karl Jenkins, educated at Gowerton Grammar School, Cardiff University and the Royal Academy of Music, London, is one of the most prolific, popular and performed composers in the world today. The Armed Man: A Mass For Peace alone has been performed over 2,000 times in 20 different countries since the CD was released, while his recorded output has resulted in 17 gold and platinum disc awards.

His style and integrity have transcended musical boundaries encompassing jazz-rock with Soft Machine, the global ‘crossover’ phenomenon Adiemus, soundtracks for Levis and British Airways, while stopping off along the way to score a Kiefer Sutherland movie, be a castaway on BBC “Desert Island Discs”, be featured by Melvyn Bragg on the ITV seminal South Bank Show and be awarded the Freedom of the City of London. Recent recordings include Requiem, Stabat Mater and Quirk. He has composed music for HRH The Prince of Wales, Bryn Terfel, Dame Kiri Te Kanawa, Dame Evelyn Glennie and the London Symphony Orchestra amongst many others.

A Doctor of Music, he holds Fellowships, Honorary Doctorates and Professorships at five universities or conservatoires, including the Royal Academy of Music, where a room has been named in his honour. In recent years, he has consistently been the highest placed living composer in Classic FM’s “Hall of Fame.”

He holds the Classic FM ‘Red f’ award for ‘outstanding service to classical music’ and was awarded an OBE, by Her Majesty The Queen, in the 2005 New Years Honours List “for services to music.”